That reads the headline on our website, a story plucked from The Canadian Press, and it’s a little misleading. Well, it’s accurate, but it’s also conservative. Uncertainty is putting it mildly, as the league and its players’ union (sorry, association) couldn’t be further apart with their season’s start only a blink away.

Meetings broke down last week and the old deal expired last Thursday, with CFL commish Mark Cohon describing the PA’s wishes as the sort of demands that would set the league back years, even decades.

“I don’t think we’re too far away right now,” said PA rep Eric Fraser, of the Ottawa RedBlacks, apparently disagreeing. “But tough decisions are going to have to be made on our end and their end and hopefully we can nail something out and everyone leaves the negotiating table a little upset because they think they gave up a little too much.”

There is considerable health in the CFL right now, as long as the Argonauts aren’t eventually flushed by an NFL franchise in Toronto. And, you know, as long as this strike doesn’t wipe out their season… or even a game.

Congrats to New York FC for scooping superstar David Villa from Spain – just when they also (reportedly) alley-ooped English national Frank Lampard from London’s Chelsea – but perhaps the glass deserves to be raised not to the club, but to the MLS.

When the league brought David Beckham over in 2007, it was a coup – but it only mattered if North America could continue its trend, capitalize on the momentum.

And congrats to Glen Johnson, the Vancouver Whitecaps’ first-ever signing (back in 1974) who predicted something similar when I interviewed him in May:

“I think the league is solid. I think we’re going to see more and more, some players are going to start ending up because the salaries are available and the clubs can afford to pay them.”

Sticking with soccer, the Whitecaps will have one player in the World Cup, and that will be Iran’s Steven Beitashour.

Fortunately for him, his underdog squad won’t be in anything resembling a Group of Death. Iran will be in Rio in Group F, where the bracket’s biggest threat is the always-awesome Argentina and Lionel Messi. Other than that, their competition comes in the form of Boznia & Herzegovina and Nigeria.

Best wishes to Canucks’ defenceman (soon a free agent) Andrew Alberts in his recovery from an apparently extremely detrimental concussion, which the 32-year-old suffered last season, just 10 games in.

Alberts was elbowed in the head by Calgary enforcer Brian McGrattan and says he still can’t get through a day without feeling the effects.

“I think there should have been some supplemental discipline,” he said, in an interview with The Province. “If I’m Sidney Crosby, it’s probably a 15-game suspension. The frustrating part is I’m working my ass off trying to be on the team and get in the lineup, something like that happens and the guy gets off free and now here I am just hoping I can have one day without headaches.

“I’ve kind of just let it go because there’s no point in dwelling on what happened. I just want to get healthy again to the point where I’m not having issues and can just have a normal day around the house. That’s where my focus is right now.

Alberts also said he think the injury could be career-ending. Could be…

Truth is, Canucks fans were pretty hard on Alberts when he joined the team during its 2008-2012 heyday. He isn’t the fastest from the backend and he didn’t seem to fit with the rest of the team’s offensively dynamic model.

But he has worked his ass off for Vancouver for years now – always showing up ready for training camp, ready to earn a spot, even though he’s definitely heard the criticism.

He’s a warrior. We often toss around that promotional phrase The Heart of a Canuck, and we tend to slap the faces of Ryan Kesler or Alex Burrows with the words, but Alberts has truly embodied that motto in his time with Vancouver.

Let’s hope he gets the chance to impress somebody else (other than myself) real soon.

And if the NHL needs a photo to stand for its whole anti-concussion crusade, this one below (copied from The Score’s blog) kinda hits it right on the head… 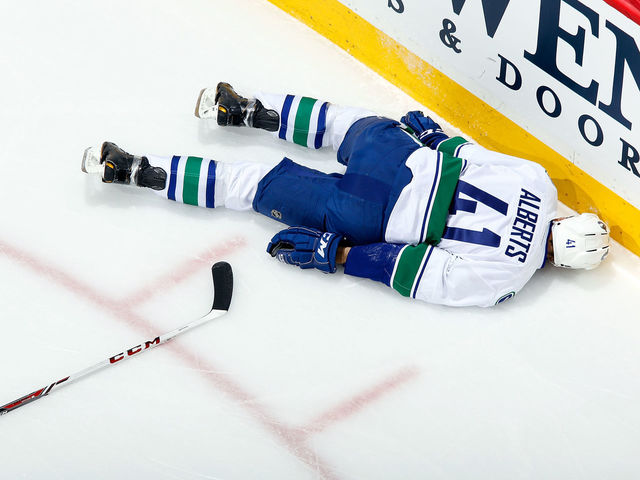 Watching last night’s epic end to an epic Western Conference Final, a few things crossed my mind, and they probably crossed yours…